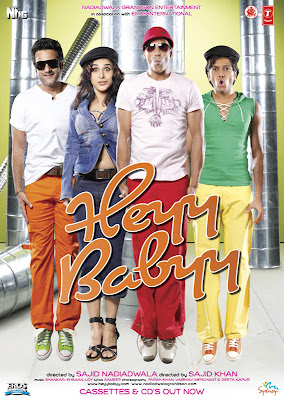 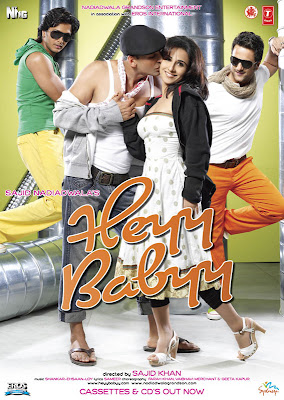 Here’s my review of Sajid Nadiadwala’s latest movie Heyy Babyy.Here are my ratings-

Today,I have decided to give just one rating as there can be no two opinions regarding the movie.I was tempted to give the movie a 3.2 but i deducted 0.1 from the ratings as the movie ended with the message-“LOVE YOU SRK” which I didn’t like.The movie is a comedy with a few serious patches in between.The cast is too large to mention but the lead actors are-Akshay Kumar,Ritesh Deshmukh,Fardeen Khan and Vidya Balan.

The movie has a good beginning with the title song being a nice introduction.The song has more than a dozen heroines having a role of 10 seconds each.The movie starts on a funny note and then becomes a bit serious like an ordinary movie.The serious part is punctuated by comedy which makes it entertaining.

The movie has a spoof of the movie-DDLJ i.e.-Dilwale Dulhania Le Jayenge.A lean and funny looking Shah Rukh Khan has a special appearence for a song in his DDLJ role.I would rate Shah Rukh’s designer-0.1/5 because 0 does not look nice.He was looking like a joker in the movie.

An Inference I made from the special thanks to SRK is that the 17 heroines having a 10-20 second role were paid and SRK wasn’t paid for his appearance.One of the most important aspects of watching movies in a cinema hall is that you get to see some latest trailers.This one featured the trailer of Om Shanti Om.

The trailer of Om Shanti Om was not good enough to make me curious to watch the movie but I predict a good opening for it due to the Presence of Deepika Padukone who has been one of Google’s top searched people.The movie looks like an old movie.Farah Khan has always had a fascination for movies like old ones.

If you want to know whether Heyy Babyy is worth watching,I’ll give you an advice-watch it at least once.The movie is a must watch for feminists who like to see men being slapped by women.