I have decided to keep you informed about various features offered by UBUNTU 7.04 gradually as I discover new ones.If you remember I had shown you a screen-shot of my desktop the last time I posted about UBUNTU.Today I want to show you what I’ve done with my desktop so far.I’m planning to upgrade my Graphics Card and make use of some desktop effects.What I like the most is Geyes,a pair of eyes,I’ve put on my top panel.The eyeballs move in the direction of movement of the mouse pointer.Here’s my desktop- 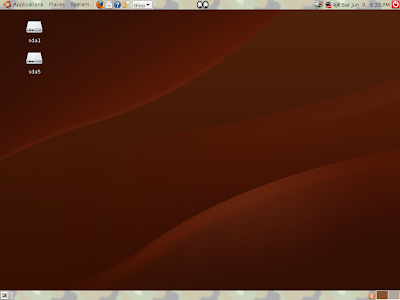 I recently downloaded a nice utility called Blog Entry Poster with the help of which I made this post.I’ve got it placed where I wanted it to be-on my panel.I’ll keep you informed about more features once I know more about them.Till then I will leave you with these.You can soon hope for a sequel.

Yesterday, I finally received my free Ubuntu 7.04 CD. I didn’t expect it to come this soon as my friend GQ had ordered his copy much before I ordered mine and he is still waiting for his CD. I was really excited to try this latest version of this Linux based Operating System. I installed it successfully without any problems considering that it didn’t affect the Windows XP professional edition-Service Pack 2 installed on the other partition of my hard disc. Ubuntu is an ancient African word that means “humanity to others”. It was easy to install as it came with a live installation CD. All you need to have is at least 256MB of RAM and around 4GB of disc space. This is the first Linux OS I have tried and it seems to be great at first look. The installation is far more interactive than any Windows installation. As I have mentioned earlier Ubuntu is a Linux OS. Thus, you can use it absolutely free of cost. Therefore, you can order your own CD or download the files and burn a CD by clicking on the link below

I’ve decided to give you a glance at what you will receive if you download order Ubuntu. This is what the cover looks like 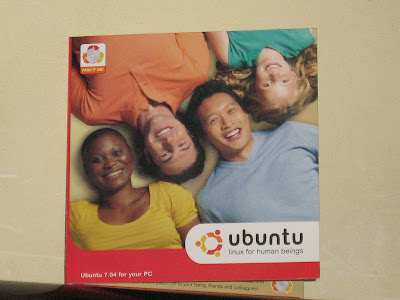 And here’s a picture of the CD

Ubuntu has a really good Afrikaans start up tone which is music to your ears. I personally got extremely bored of the Windows XP start up tone. The software bundled with it includes Open Office, which I must say, is much better than Microsoft Office. Mozilla Firefox 2.0.0.3 is the default web browser and archive manager is the default archiver. The Add or Remove software menu is a good utility that allows you to download and install softwares easily. I would rate Ubuntu 7.04 *****(5/5). Thus, if you are thinking of upgrading to Windows Vista, you should try Ubuntu at least once before doing so. Why would you want to waste money for an unsafe OS if you could get a safer one free of charge.If you want more pictures,here’s a picture of my desktop. 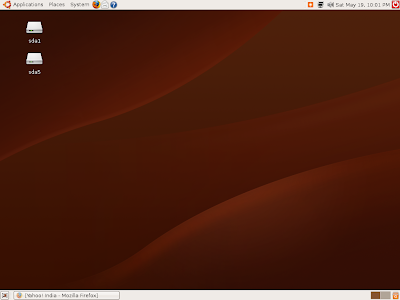 I hadn’t heard much about Linux until my friend Ankur Banerjee told me about it. He’s a proud Linux user and soon I’ll become one too. I’ve just place an order for my CD of the latest OS Ubuntu 7.04(Feisty Fawn) which works on a Linux platform. After knowing about Linux in detail, I decided to publicize it a bit as I feel it isn’t getting much publicity.

I’ll start from the very basic definition for amateurs to understand what I’m talking about. Linux is an Operating System (like windows). It is much more secure than Windows XP or Windows Vista which claim to be the safest Operating Systems. If you’ve ever come across a book on hacking, all hackers have a common opinion that security and Microsoft never go together. All books say that a system running on windows is the easiest to hack. It is a well known fact that an unprotected system running on Windows can be hacked in 10 minutes if it’s online.

Linux has many salient features. According to me one of the greatest assets of Linux is that there is nothing such as a virus for a Linux system. Thus you don’t need any anti-virus if you are running on a Linux system. The reason is that no file can install itself in a Linux system as Super-Administrator rights are required which are impossible to obtain for malware.

One of the reasons why I’m shifting to Linux is that I’m fed up of Microsoft and all the fuss about ownership of Genuine Windows XP. All important updates I download check for the genuineness of my genuine Windows XP. What’s the point of checking it again and again? I have statistics which say that more than 80% users of Internet Explorer 6.0 haven’t upgraded to Internet Explorer 7.0 due to complicated procedure involved.

Linux offers respite from this fuss about genuine OS as it is a free software. Moreover, it is absolutely legal to copy and distribute Linux to your family and friends. Linux uses Mozilla Firefox as its default web browser which is much better than Microsoft Internet Explorer. As I’ve mentioned in earlier posts Mozilla Firefox is an award winning browser.

If you’ve ever loaded Windows on your system you might know that it takes a minimum of 30 minutes to install Windows. On the other hand, Linux takes just 13 minutes for installation.

I’m sure that after reading this you would be convinced that Linux is clearly the dark horse which is much better than Windows which always remains in the spotlight.
You can get your own copy of Ubuntu 7.04 delivered to you for free. Just click on the link below to order your free CD.